Eglė The Queen of Serpents

Tale summary
From old times the strongest trees are oak, ash and birch. And aspen tree shivers from any wind because she shivered in front of uncles and betrayed her father and mother.
The legend about young girl who gave a word for the serpent to marry him, how was her life in the bottom of the lake and how it was hard for her and for her family to separately.

Educational potential / Learning Outcomes
Lithuanian legend about agreements in the family, how to keep his/her word and other life lessons (like respecting grandparents, keep in touch with them, etc.). Children can understand these lessons through legend characters, their behavior.
Full Plot
In another time, long ago lived an old man and his wife. Both of them had twelve sons and three daughters. The youngest being named Egle. On a warm summer evening all three girls decided to go swimming. After splashing about with each other and bathing they climbed onto the riverbank to dress and groom their hair. But the youngest, Egle, only stared for a serpent had slithered into the sleeve of her blouse. What was she to do? The eldest girl grabbed Egle’s blouse. She threw the blouse down and jumped on it, anything to get rid of the serpent. But the serpent turned to the youngest, Egle, and spoke to her in a man’s voice:

-Egle, promise to become my bride and I will gladly come out.

Egle began to cry how could she marry a serpent? Through her tears she answered:

-Please give me back my blouse and return from whence you came, in peace.

But the serpent would not listen:

-Promise to become my bride and I will gladly come out.

There was nothing else she could do; she promised the serpent to become his bride.

After three days the family saw that every serpent in the land had come to their farm, bringing with them a wagon. The whole family was scared, while all the serpents began to slither around in wild abandon. One of the serpents entered the house to meet with the old man, Egle’s father, and to discuss the terms of the union. At first the old man hemmed and hawed, refusing to believe that this could be happening; but when all the serpents in the land have gathered in one man’s farm it does not matter how one feels, so he promised to give his youngest and most beautiful daughter over to the serpents. But the old man held treachery in his heart. He asked the serpents to wait a little while; as quickly as he could he ran to the local wise woman and told her everything. The wise woman said:

-It is easy to trick a serpent, instead of your daughter give him a goose and send the wedding presents.

The old man did as the wise woman advised. He dressed a white goose in Egle’s clothing, and together father and ‘daughter’ climbed into a wagon and began their journey. A short while later they heard a coo-coo bird in a birch tree, singing:

The serpents returned to the farm, and angrily threw the goose out of the wagon and demanded the bride. The parents, on the advice of the wise woman, dressed a white sheep up. Again the coo-coo bird sang:

Eventually Egle and all her chaperones came to the sea. There she met a handsome young man who was waiting for her by the beach. He told her that he was the serpent that had crawled into her sleeve of her blouse. Soon, they all moved to a nearby island, and from there they descended underground, under the sea. There could be found a lavishly decorated palace of amber. It was here that the wedding was held, and for three weeks they drank, danced and feasted.

The serpent’s palace was filled with guests, and Egle finally calmed down, became happier and completely forgot her homeland.

Nine years went by and Egle gave birth to three sons -Azuolas, Uosis and Berzas – and a daughter -Drebule – who was the youngest. One day while playing the eldest son asked Egle:

-Dearest Mother, where do your parents live? Let’s go and visit them.

It was then that Egle remembered her homeland. She remembered her parents, brothers, and sisters. And she began to wonder if life was good to them; are they healthy? It had been a long time and maybe they were all dead. Egle desperately wanted to see her homeland. It had been many years since she saw that land of her birth; she yearned to see it again. Her husband, the serpent, did not even want to listen to her entreaties.

-Fine, he said, go and visit but first spin this tuft of silk, and he showed her the spindle.

-Grandmother, dear heart, teach me how to get that tuft of silk spun.

The old woman told her what to do and what was needed for the task:

-Throw it into a fire when next it is kindled, elseways you shall not be able to spin the silk.

Having returned home, Egle threw the silk into a bread oven, recently fired up. The silk went up in flames and in the centre of the oven where the silk once was there was a toad. The toad was creating silk, from its body. Having woven the silk, Egle returned to her husband pleading to allow at least a few days for a visit with her parents. Now, her husband drew out from beneath his bench a pair of metal boots:

-When you wear these down, then you shall travel.

She put on the boots and walked, stomped, and even dragged along the stone floor, but the boots were thick, hard and were not at all worn down. Walk or do not walk the shoes will forever last. Going back to the sorceress, she pleaded for more help. The old woman said:

-Take them to a blacksmith and ask that he wear them down in his furnace.

And Egle did as she was instructed. The boots were heated well and within three days, Egle had worn them down.

Having worn the boots down she approaches her husband so that he may allow her to visit her homeland.

-Fine, said the serpent, but for the journey you must bake at least a rabbit-pie for what shall you give to your brothers and their children?

In the meanwhile the serpent ordered that all the cooking utensils be hidden so that Egle not be able to bake the pies. Egle began to think how shall she bring in water without a bucket and make the dough without a bowl. Again, she returns to the old lady for advice. Grandmother says:

-Spread out the sifted leavening, immerse the sieve into water, and within it mix the dough.

Egle did as she was instructed; she mixed, baked and had the pies ready. Now, she bid a farewell to her husband and went out with the children to her homeland. The serpent lead them part of the way, and got them across the sea and said that she be no longer than nine days in her homeland and that she is to return at the end of those nine days.

-When you return go alone, just you and the children and when you approach the beach then call for me:

And if you see coming towards you foaming milk then know that I am still alive, but if blood comes then I have reached my end. While you, my children, let not the secret out, do not let anyone know how to call for me.

Having said that, he bid farewell to his family and wished for them a swift return.

Returning to her homeland, Egle felt great joy. All her relatives and in-laws and neighbours gathered round. One after another asked many questions, how did she find living with the serpent to be. She just kept describing the many aspects of her life. Everyone offered their hospitality, their food and good talk. She was in such great spirits that she did not even feel the nine days pass.

At this time Egle’s parents, brothers and sisters began to wonder how to keep their youngest amongst their midst. They all decided -they must question the children, how their mother having arrived at the beach would call for her husband. So that they could go down to the seashore, call for the serpent and kill him.

Having agreed upon this, they called upon Egle’s eldest, Azuolas and praised him. They cornered him and questioned him but he said that he did not know. Having failed they threatened the child to not tell his mother of their actions. The second day they led out Uosis, then Berzas, but from them too the adults could not get the secret. Finally they took Drubele, Egle’s youngest, outside. At first she did as her brothers, claiming to not know the secret. But the sight of rod frightened her, she told all.

Then all twelve brothers took their scythes with them and went towards the sea. Standing at the shore they called:

When he swam up, then all the brothers fell to chopping the serpent to pieces. Then, returning home, they kept the secret of their deeds from Egle.

Nine days passed. Egle, bidding farewell to all the family and friends, went off to the sea and called for her serpent.

The sea shook and floating towards Egle was foam of blood. And she heard the voice of her beloved husband.

-Your twelve brothers with their scythes cut me down, my call was given to them by our Drebule, our most beloved daughter!

With great sorrow and thundering anger Egle turned to her children and said to Drebule:

-May you turn into a willow,
May you shiver day and night,
May the rain cleanse your mouth,
May the wind comb your hair!

-Stand, my sons, strong as trees,
I, your mother, will remain a fir.

As she commanded so it came to be: and now the oak, ash and birch are the strongest of our trees, while the willow to this day will shake at the slightest whisper of a wind for she quaked before her uncles and gave away her true father.

One Lesson Plan
The theme of the week: Who is living the Earth?
1. In the morning round with children - the song about "Choir of Frogs".
2. The legend can be told by invited parent, grandparent, etc.
3. Reflection, discussion with children: what was interesting? What was unexpected? What was new about trees? What lesson taught the legend?
4. Choose the activity: draw the legend to make it as a video, make the characters with plastilin/clay, make the serpent spring. 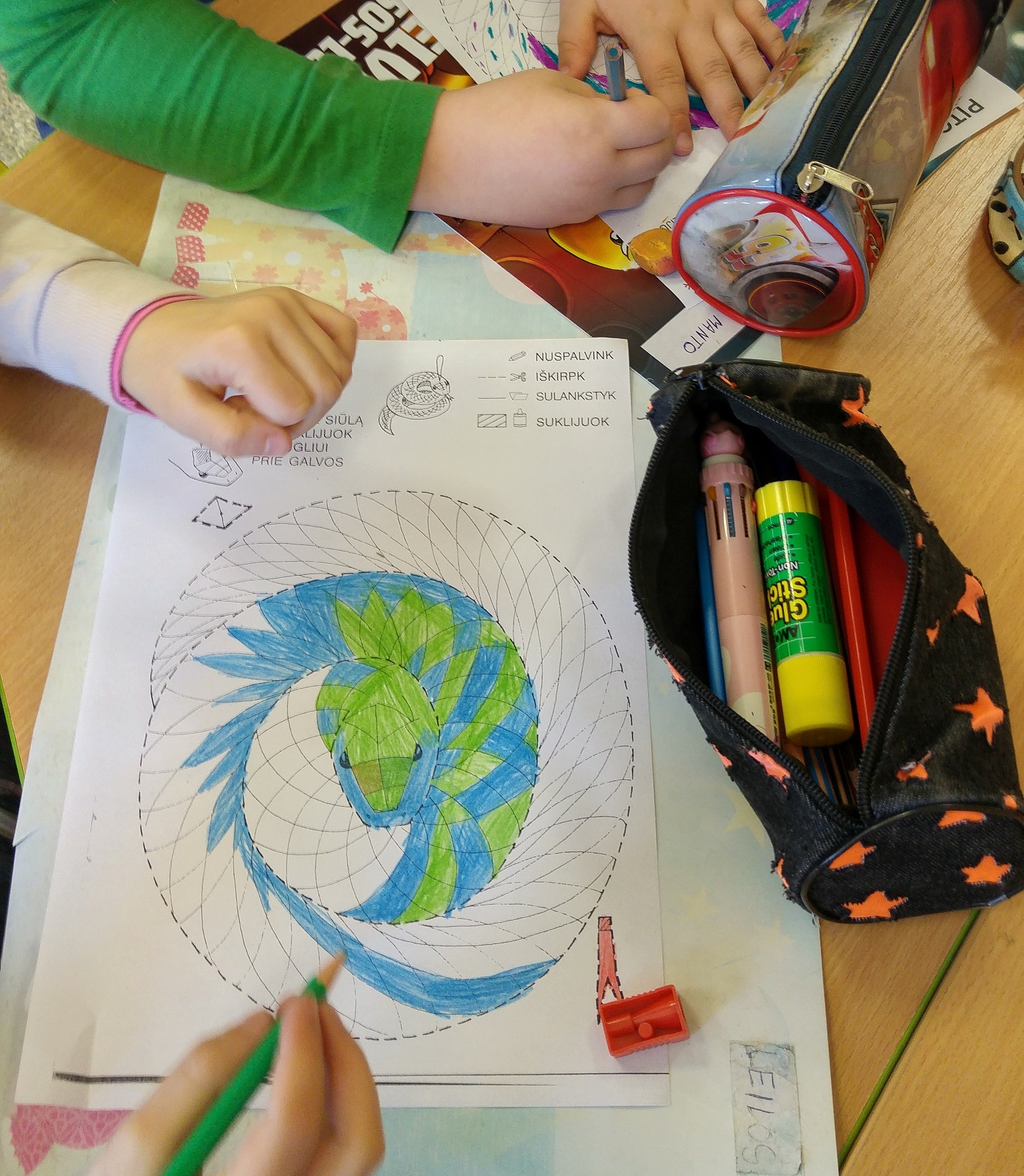 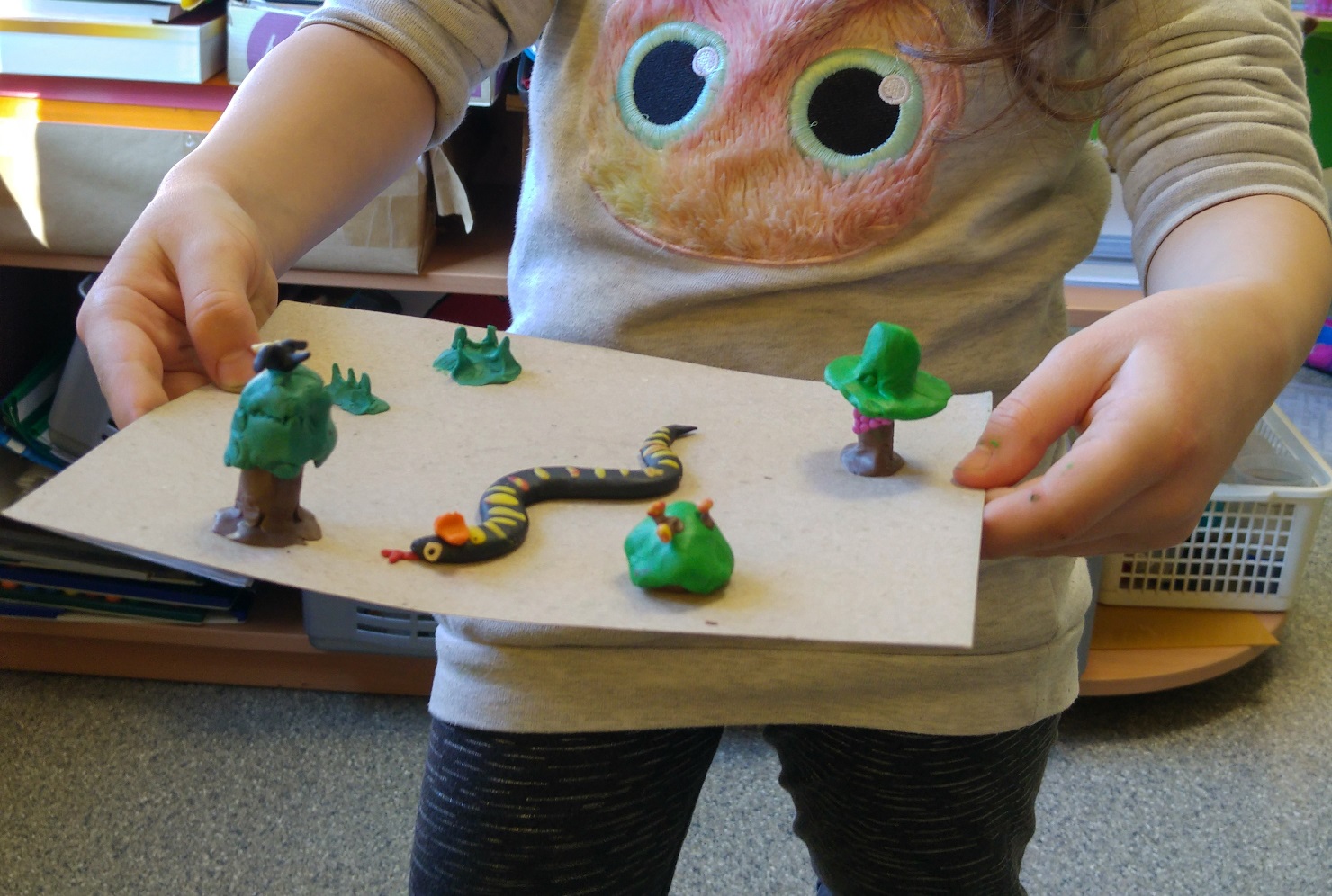 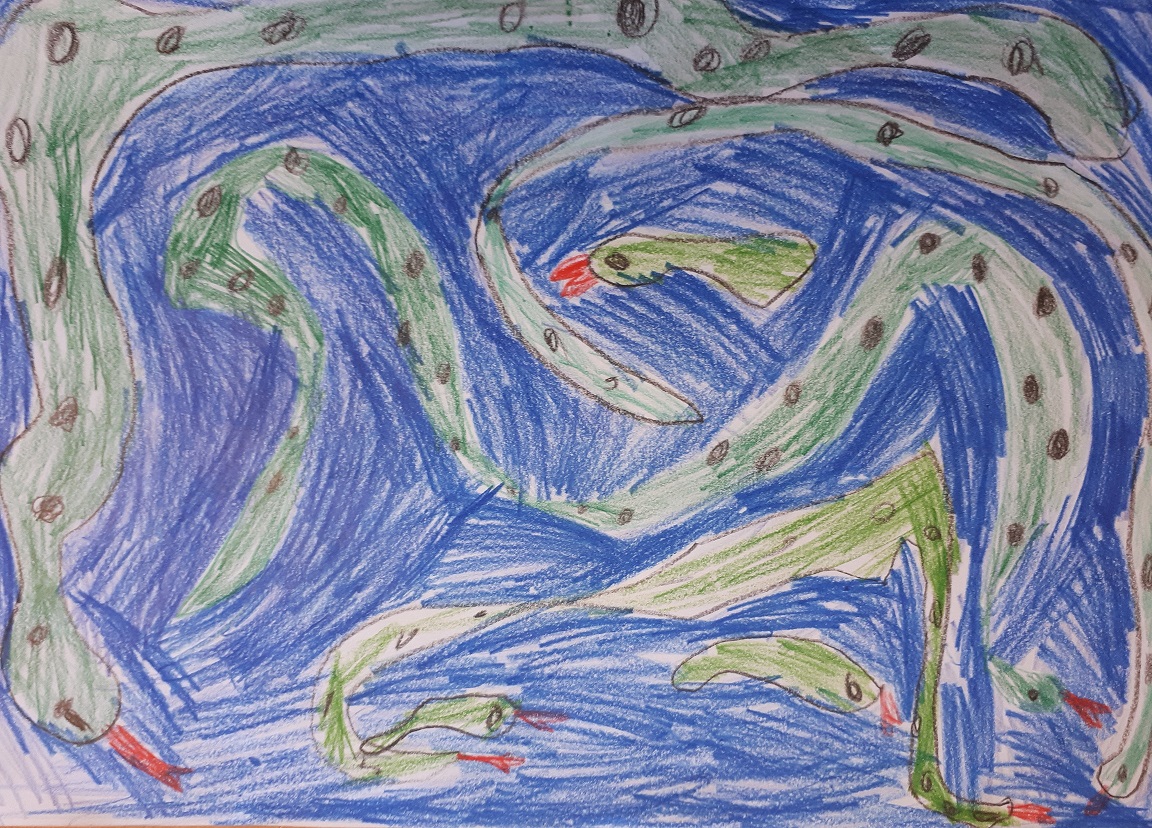