The Smallest Pea of All

Tale summary
This is a tale written in the Samogitian dialect about peas. Peas lived five in the pod. One pea was very small and the brothers decided to get rid of it. One pea broke the pod and planned to throw the smallest one away, but at night the worm family crawled through the pod and ate all the big peas.
Educational potential / Learning Outcomes
The tale teaches how to treat others, different ones, not to harm the smaller. The storyline develops: social, emotional, cognitive competences. Listening to the tale involves children in computing, physical activity, cognition, exploration and testing. As there are several dialects in Lithuania, listening to the fairy tale children became acquainted with Samogitian termus.
Full Plot
5 peas lived in the pod. Four was so needed and the fifth was much smaller than all. Four of them were mature and big and the fifth one was much smaller.

- Our brother is like pepper. He received as much sun and water and still he is little as a frog, - brothers often spoke.

- Maybe we can poke through the pod a little and throw little one out, - the third pea once suggested.

- Break the pod? Do you mean what you say? - The biggest pea became angry. - If you break the pod, we can all fall out. We are already mature and barely attached to the pod. And you talking about breaking the pod, I don’t want to hear about it again.

- Well, don't be so mad. What would happen if we scratch the pod a little? After all, the fifth brother is small, falling through the smallest hole, and we would be the healthiest pod after getting rid of it. - Said the fourth pea.

- If you want - we'll throw you out soon! - The big pea screamed, raising his eyebrows, and his face looked furious so no one dared to object anymore.

One night, when four peas were sleeping, the third largest pea was quietly awake. He came to the biggest pea bed - this one sleeps. The second largest pea was also sleeping, his saliva was flowing through the pillow. And the fourth pea, like every night, was snarling, as if a tractor engine had started. All he had to do was check out the cot of the small - fifth pea. This one slept calmly.

The third pea did not hesitate for a second, ran to the end of the pod and grabbing with both hands pulled the pod to himself. The tip of the pod itself ruptured, and all you had to do was insert your hand into it and break through it. He didin’t want to make a big hole, because it would be to cold. After all, the fifth brother is like a pepper, how much he will need there to fall outside.
Tomorrow morning he will get rid of him - after all he will get up asleep.... Until he wakes up ... He will fall unexpectedly… - the third pea enjoyed his bad work and lay in bed as if nothing had happened.

And a wormhole family: dad, mom and seven kids lived near the pea pod. The kids were already grown up and they needed a lot of food. Parents no longer knew how to feed them. One night, all the worms were crying - they wanted to eat, and Dad was telling to Mom:
- Maybe we can climb to that pea pod? After all, they are sweet, soft now.
- Let’s climb up to get some food to the kids.
They did what they said. Little by little, little by little the worm family climbed into the pea pod. It can't be better - you don't have to do anything yourself, you can go and eat right away. After all, the pod is ruptured, so the worms rolled inside. The worms started to eat all the big peas in a row. When worms had eaten the big peas, one of them said:
- Dad, Dad! - There's another pea lying there, let's eat it too, one left behind. Dad patted his belly with both hands and said:
- Let it be so small it grew up. If you haven't eaten enough, you better climb to another pea pod!
And leaving the smallest pea in the pod, the wormhole family went down the pea stem.

One Lesson Plan
After listening to the tale, the children got acquainted with the Samogitian dialect and explained the meanings of the unknown words. They compared the Samogitian dialect with the common Lithuanian language, looking for similarities and differences in words.
While listening to the tale in common language, children learned the parts of the plant: roots, stem, leaves, flowers and fruits. Kids went to to the garden in the backyard of the kindergarten, they found peas among different vegetables, explained their differences (shape, stem, fruit, size, etc.) and how similar they were to other vegetables (color, leaves, etc.). Children picked the peas, tried to compose their names letters using peas. Children opened the pods of the peas, counted the peas in it, picked the largest peas, compared to their friends, who had the biggest peas in the pod.
In the creation of the story children cut the pea pod and peas, glued them from the largest to the smallest, drew their emotions, debated which pea was right and which was not. They reasoned how to deal with others, different ones. Children learned what we are different at: height, hair, eyes, skin color, etc.
Children were making pea pods and balls using modelin, they colouerd them and made a painting of them. 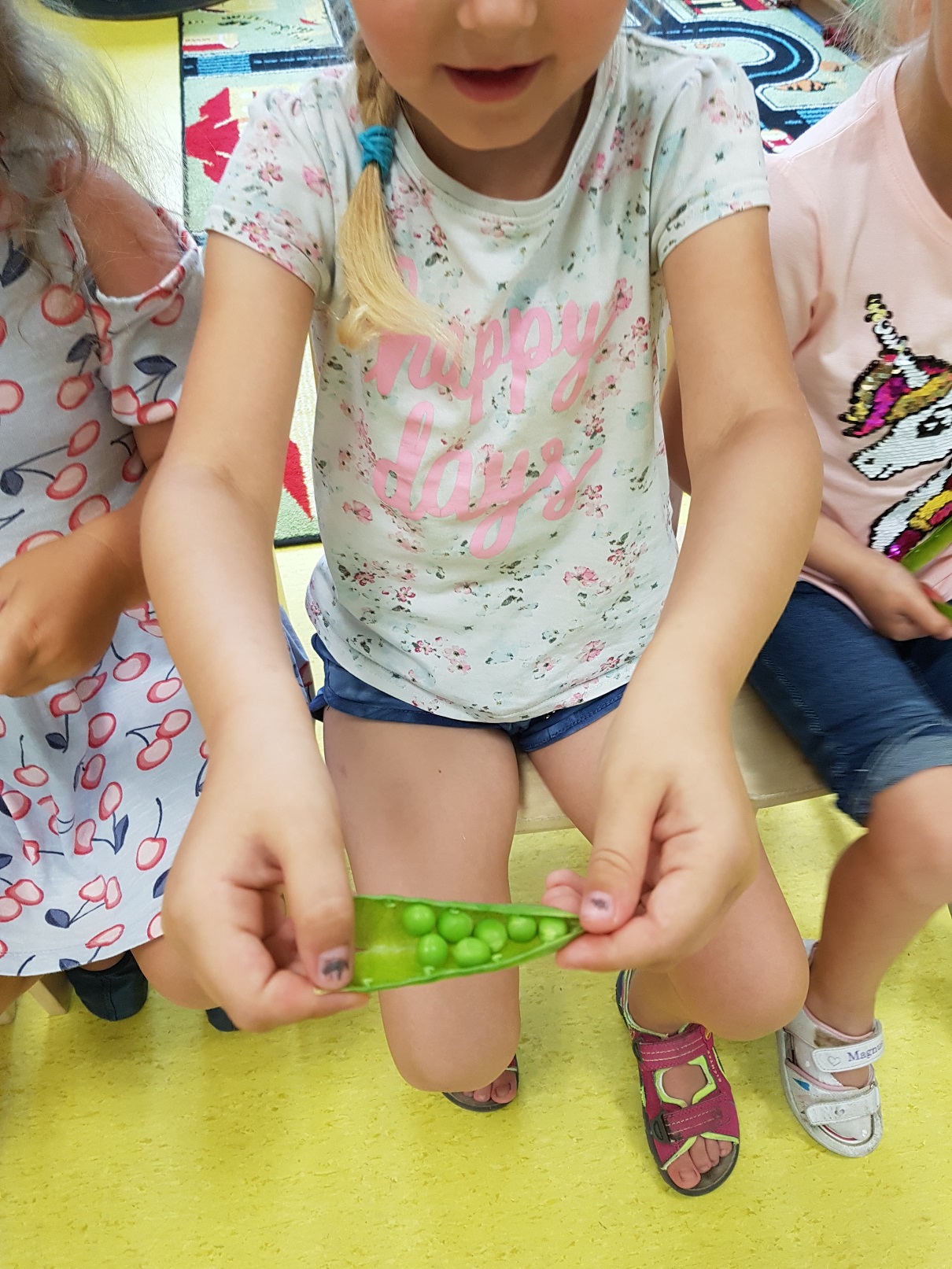 Real character of the story - peas 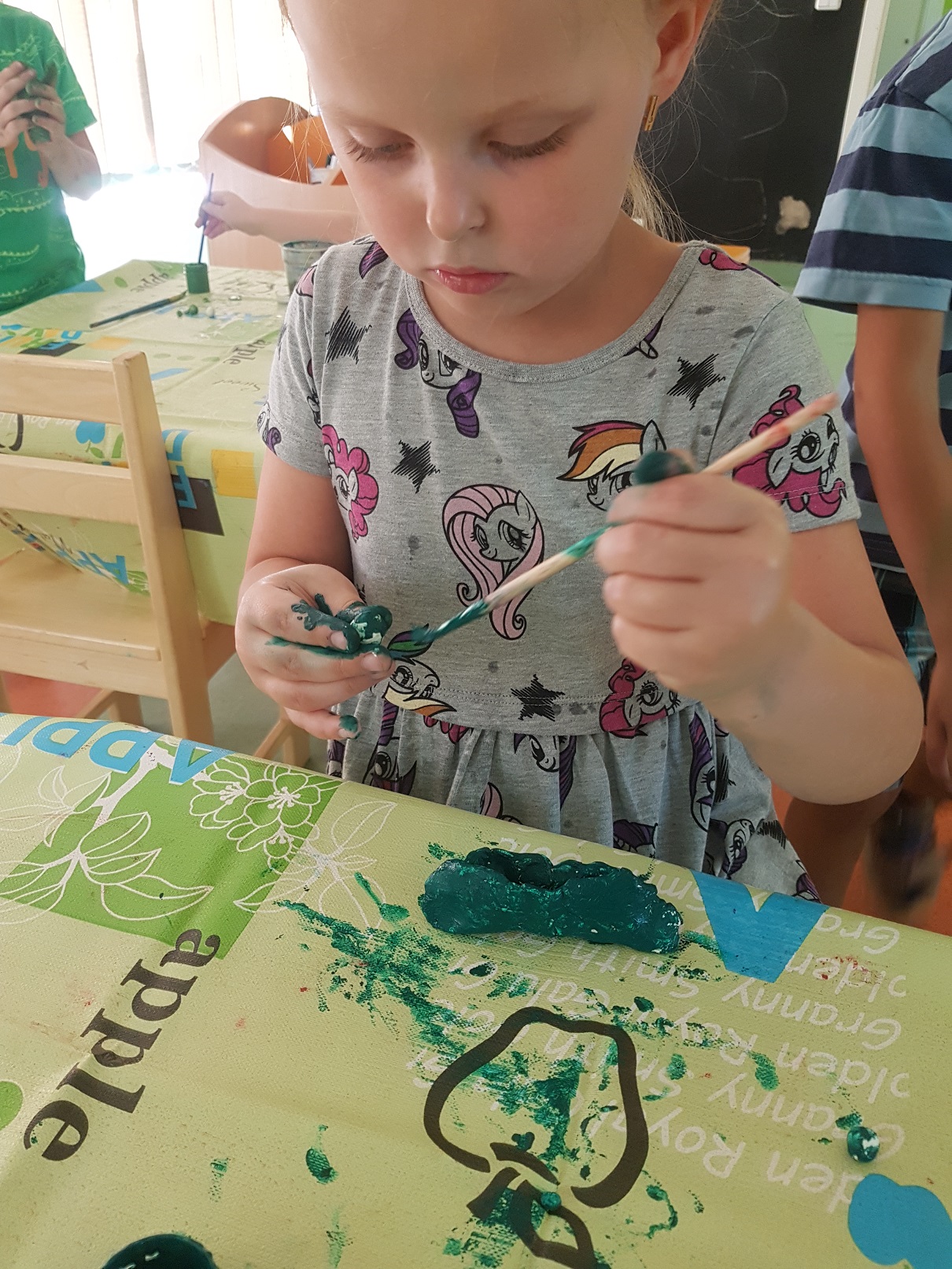 Children making the illustrations of the story using polymer clay 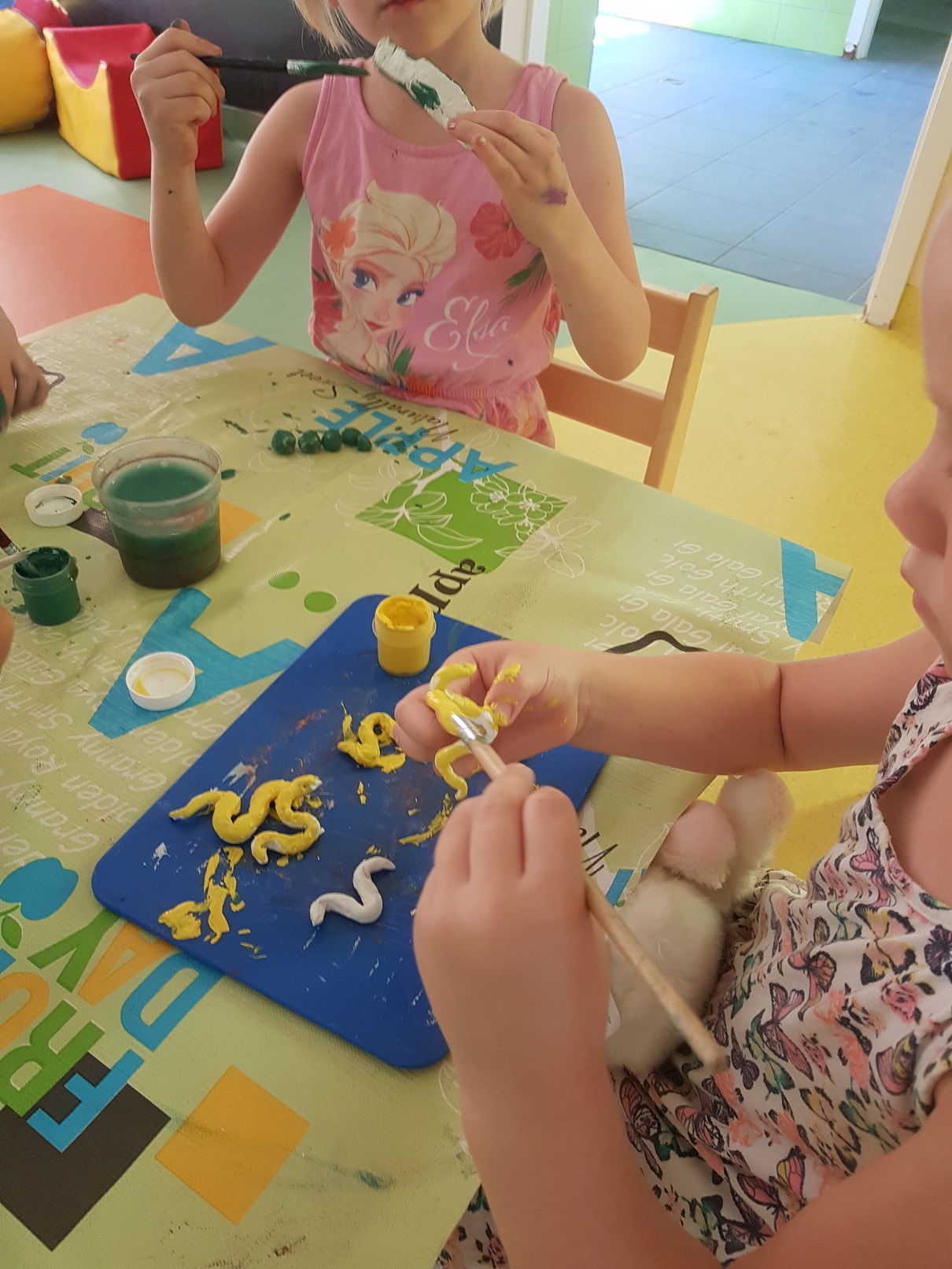 Children made illustrations for the story using polymer clay 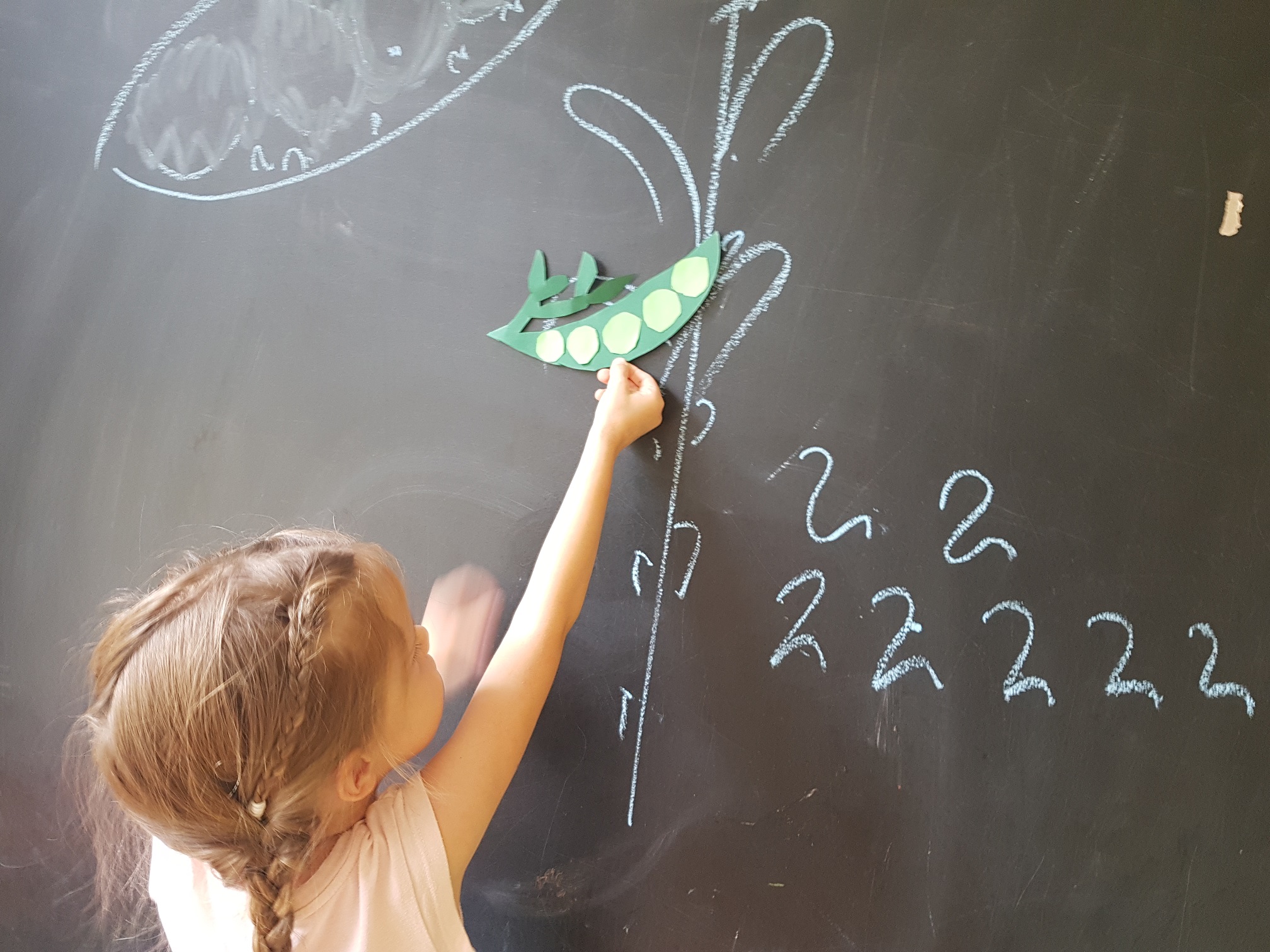 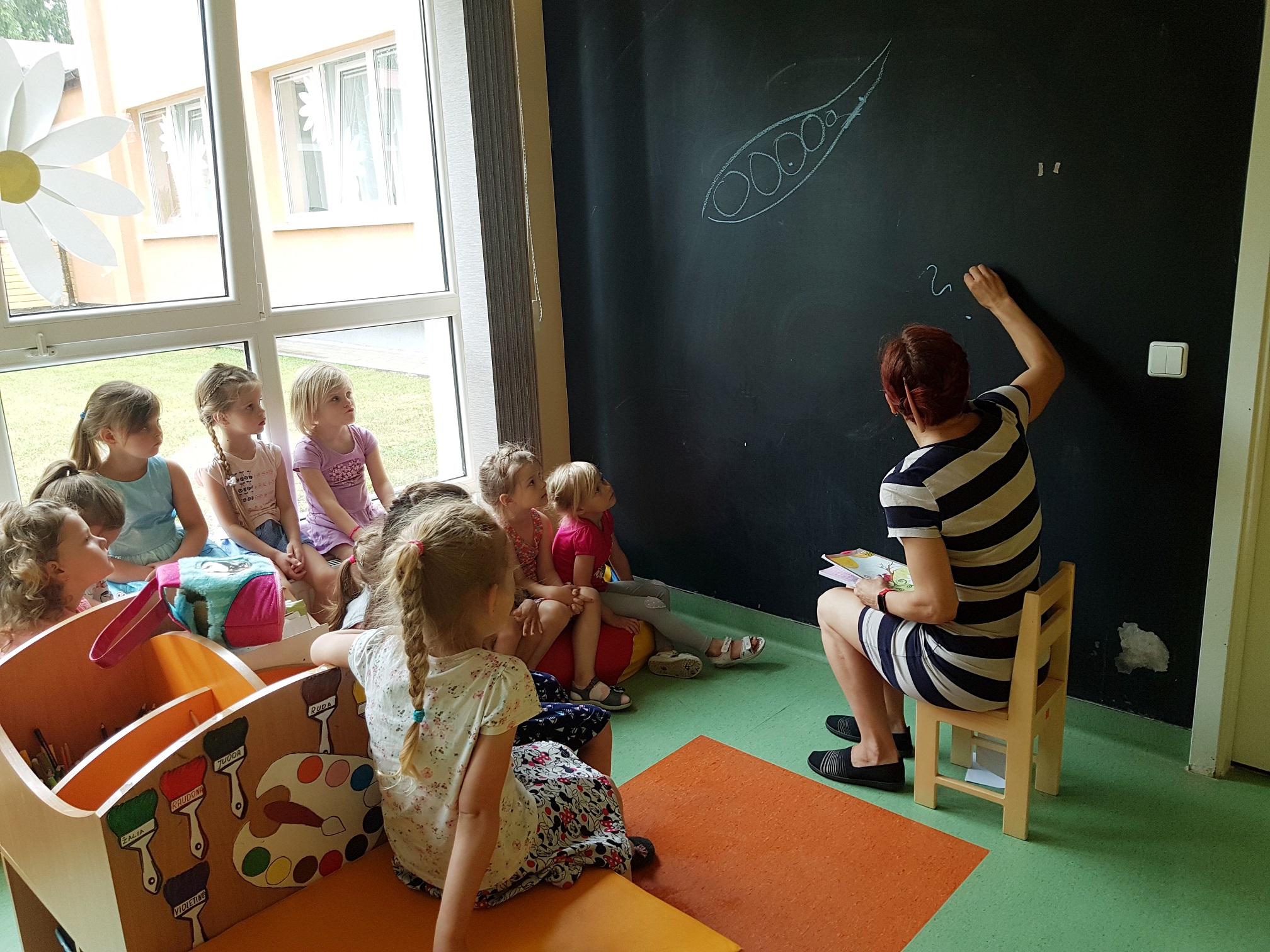 Mom is reading the story

EN Children were listening very engaged, they watched the changing pictures which depict the fairy-tale plot. I think this fairy-tale is very suitable to educate children about relationships, tolerance. Also this fairy-tale and theme can be developed and used in more activities like watching peas growing in spring, count them, analyze the parts of plant, etc. We are glad that we found new, interesting and useful fairy-tale.