The Golden Fish (A. Pushkin)

Tale summary
The fairy-tale is about old fisherman, greedy old woman and golden fish. For letting a golden fish back to the sea, she promised to fulfil all fisherman‘s dreams. However, it was never enough for old greedy woman. She wanted new house, then palace and finally decided to become the queen of the sea. As a result, because of so big and greedy dreams she was left without anything.
Educational potential / Learning Outcomes
While listening to a fairy-tale children noticed that there were lots of various emotions (anger, greediness, kindness and sadness), so we discussed those emotions and found out ways to overcome them. What is more, while analysing this fairy-tale, children had a possibility to learn some figurative language expressions, jokes and idioms. Some of children‘s artistic skills were also disclosed.
Full Plot
Once upon a time an old man and his wife
Lived on the shore of the blue sea
In an old mud hut.
Exactly thirty years
He made a living by fishing,
While his wife beat butter.
He casted his fishing net once – didn‘t catch anything,
Casted twice – didn‘t catch anything,
Casted his fishing net three times,-
And caught one fish in his net,
Not a simple fish, but a golden fish.
The fish started begging him in a human voice:
“Let me go, old man.
I will reward you for my freedom
By giving you anything you desire.”
The fisherman was astonished
And frightened because
He has fishing for thirty years
And had never before heard a fish speak
He let the fish go
and said kindly to her,
"God bless you, golden fish.
I don’t need anything from you."
The fisherman went home
And told his wife the wonderful thing
That had happened to him:
„I caught a fish today,
Not a simple fish, but golden one.
She begged to let her back to the sea.
Promised to pay back.
I didn‘t have enough courage to ask for anything
And let her back to the sea. “
But old woman cursed him angrily and said,
"You are such a fool not to make a wish!
Go back, bow to her and ask for a new house!”
The old man returned to the seashore
And called out to the golden fish.
She swam up and asked,
"What do you need, old man?"
He bowed and replied that
His wife cursed at him
Because she needed a new house.
Golden Fish replied:
"Go home then," said the fish,
"You will get a new house".
When the fisherman returned home
He saw the new house.
But his wife shouted at him,
"You are such a fool!
Go back to the fish!
I want be queen of all the land!"
The old man went down to the seashore.
The water was roiling;
The sky and sea had become almost black.
He called the golden fish.
When she swam to the shore,
He bowed and said that
His wife now wanted to be queen of the land.
The fish comforted him
And let him go home.
When the fisherman arrived,
He found a great palace,
Inside which his wife was seated on a throne.
Old approached the queen and said,
“Greetings, Your Majesty.
I hope you are happy now.”
She did not even look at him
And sent for the old fisherman
And again ordered him to go to the sea
This time to ask
The golden fish to become her servant
And make her Empress of Land and Sea.
The old man got scared and started begging:
“You are like a man in a trance!”
The old woman got angrier even more:
“How dare you argue with me?
Go to the fish, I am ordering you.”
A terrible storm was raging there,
Waves crashing against the shore.
he old man yelled as loud as he could
And the fish rose out of the waves.
"What do you need, old man?"
He bowed and replied
„Have pity on me!
That crazy woman wants to be
Empress of Land and Sea
And you to become her servant. “
This time the golden fish did not reply,
But turned and swam away out to sea.
After waiting a long time in vain for any answer,
The fisherman returned home–
Where he found his old mud hut
And old woman beating butter.


Emotions.
Kindness.
When I feel great-
I am gentle, cute and caring.
The little heart is always warm.
I feel well,
As I am willing to help.
What a great feeling to help-
Understand, sympathize and hug a friend.

Anger.
Volcanoes are waking up in the belly,
When I am very angry.
I kick and trample everything down....
I want to run away and don’t stop.
I am angry when someone destroys my castle,
Mocks at me or scolds for no reason.

Sadness.
All the colours fade away when I feel sad,
Everything is grey and gloomy.
When I feel sad I cry my eyes out...
Should I lay down under the blanket,
And do not disturb anyone?

Greediness.
I like everything I have.
I have everything I want.
I don’t care what others say.
I want!
I want puppy as a friend,
Or new Ferrari.
I want, want, and want.
Good ways to overcome emotions.
Anger.
What should I do when I am angry?
Breathing in and breathing out,
Staying alone,
Talking to a friend,
And of course laughing.
Sadness.
Sadness will fade away
When a friend will embrace
And will quietly tell:
“Everything will be okay”.

Greediness.
Although you want everything,
You cannot have it all.
The more you want,
The less you have.

Kindness.
Kindness means to say thank you and please.
Sun lights and morning dew.
When true friends are by your side.

One Lesson Plan
Topic of the week „My mood“
After having listening to a fairy-tale „The Golden Fish“, children recognised and identified character‘s emotions: greediness, kindness, anger and sadness. They were discussing actions of characters and thinking how they would have behaved if they had had been those characters. With the help of fine arts and acting, they were expressing their feelings and emotions. Moreover, they were trying to talk clearly and learned the meaning of a figurative expression “like a man in a trance”. Children were talking in their own words while performing in order to express their thoughts.
What is more, your town is located near an amazing lake “Bevardis”. Children had an opportunity to meet its resident – fish; the profession of fisherman and its work-tool – fishing net. 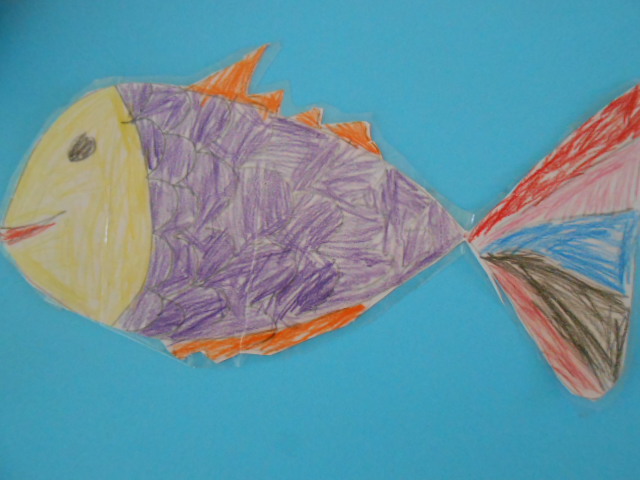 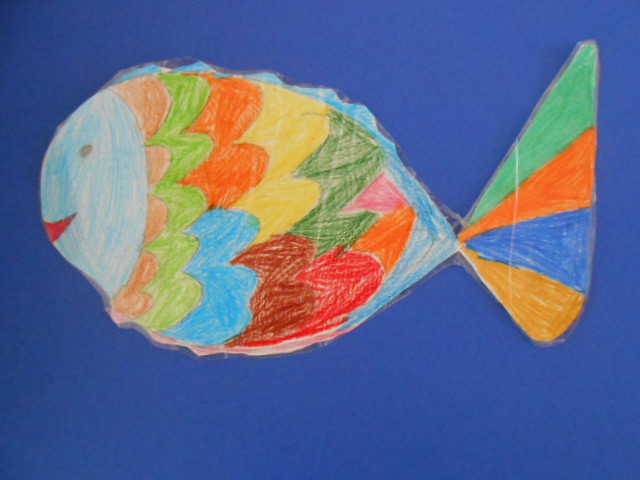 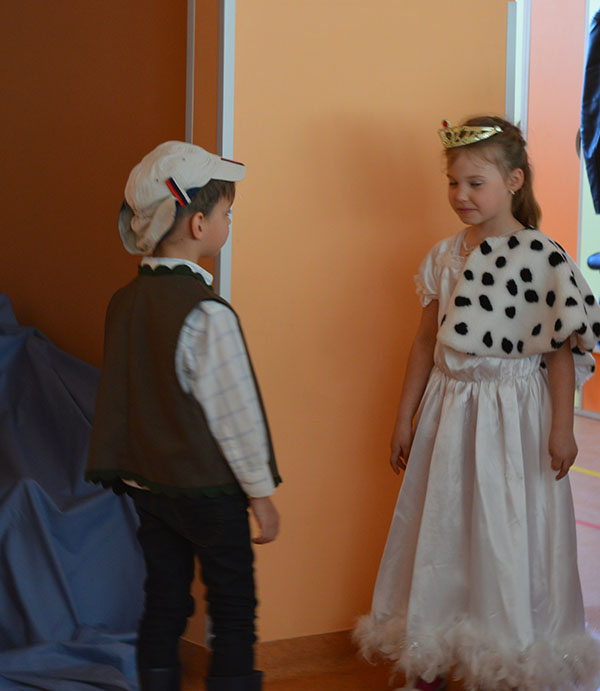 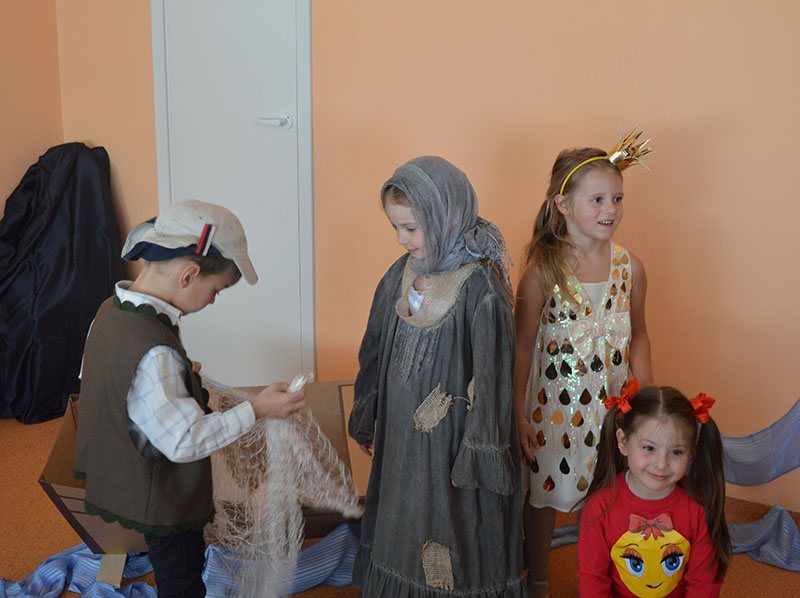 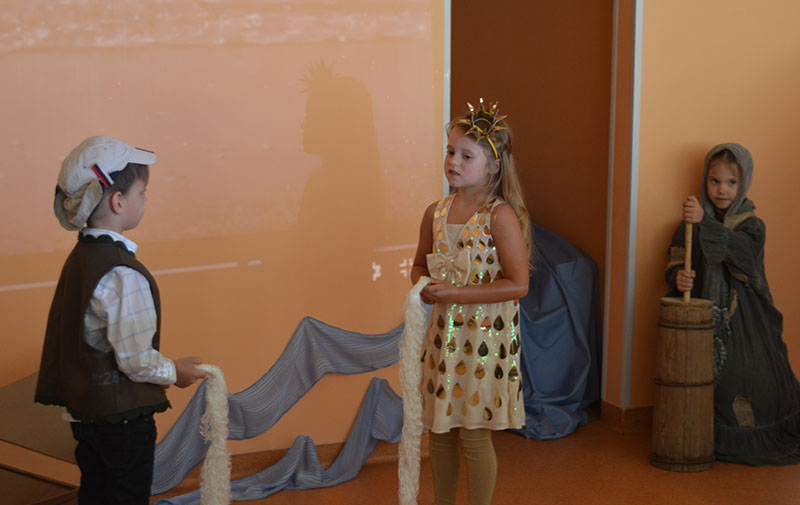 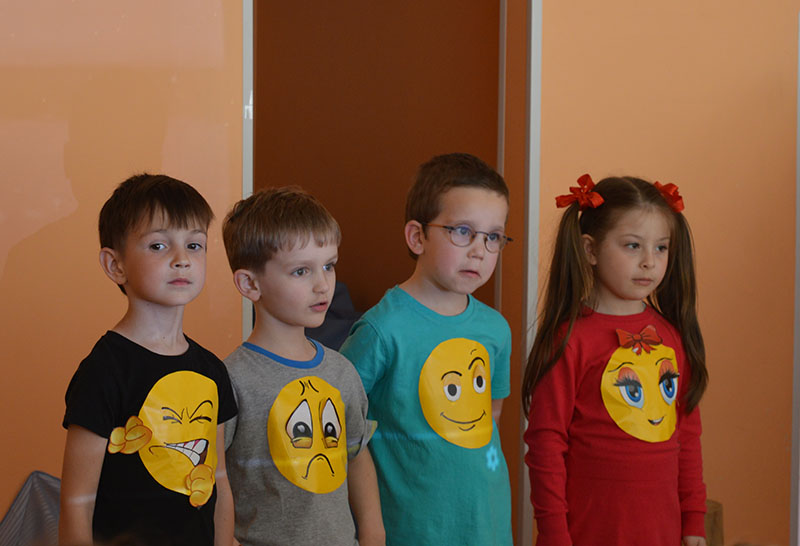