The Hen and the Rooster

Tale summary
The story is about how hen and rooster went to pick nuts. Rooster accidentally broke hen‘s eye by throwing nuts, so she complained to grandma about this accident. Grandma started asking everyone why it happened. She was asking rooster, hazel, goat, shepherd, housewife, pig and wolf why they did that, but greedy wolf did not respond anything and ran away to the woods, with last stolen pig. Grandma kissed hen‘s eyes and she recovered.
Educational potential / Learning Outcomes
A well-known story, which was told by mom, appeared differently. Children enjoyed it a lot, as it was told by mom, not a teacher. What is more, they chosen individually which situations and characters to draw. A special exposition was organised, where children were rejoicing and displaying their drawings, telling a story to their parents and explaining how they managed to draw characters. They were also counting story’s characters, exploring where those characters live. Moreover, children noticed that it is very important to figure the situation out and do not judge others or hurt the weakest one, but help them to deal with difficulties. Children tend to blame others, but not themselves. There is no saying “it’s not my fault, but someone else’s”, that is why it is necessary to figure everything out completely.
Full Plot
Once upon a time, there lived grandpa and grandma.
They had the rooster and the hen. Grandma sewn pants for rooster and skirt for the hen and let them to pick the nuts.
Rooster climbed up to the hazel, while the hen was running around the tree and clucking:
“Cluck, cluck! Give me some nuts!”
As soon as rooster threw some nuts at her, he broke hen’s eye accidentally. The hen, running around the tree, clucks again:
“Cluck, cluck! Give me some nuts!”
Then rooster threw some nuts to the hen again and he broke her another eye.
The hen ran home screaming and complained to grandma that the rooster broke her eyes. Grandma begun scold rooster:
“Rooster, why did you broke hen’s eyes?”
“Why did hazel rip my pants off?!”, replied rooster.
“Hazel, why did you rip rooster’s pants off?”, asked grandma.
“Why did goat gnaw me?!”, replied hazel.
“Goat, why did you gnaw hazel?”, asked grandma.
“Why shepherd didn’t pasture me?!”, replied goat.
“Shepherd, why you didn’t pasture goat?”, asked grandma.
“Why housewife didn’t roast scone for me?!”, replied shepherd.
“Housewife, why you didn’t roast scone for shepherd?”, asked grandma.
“Why did pig guzzle my dough?”, replied housewife.
“Pig, why did you guzzle housewife’s dough?”, asked grandma.
“Why did wolf steal my child?!”, replied pig.
“Wolf, why did you steal pig’s child?”, asked grandma.
Wolf did not respond anything, grabbed the last pig and ran to the woods.
Grandma kissed hen and her eyes healed.

One Lesson Plan
Topic of the week „YOU AND I ARE DIFFERENT“
In the kindergarten we plan activities for the week ahead, so we suggest adding one or two points from the plan each day.
1. Game „Tell me what you feel“;
2. Game „Sewn story“;
3. Storytelling;
4. Storytelling using finger puppets;
5. Fairy Tale puzzle;
6. Count fairy tale’s characters;
7. Cupcake of friendship is just one and there is a lot of us. 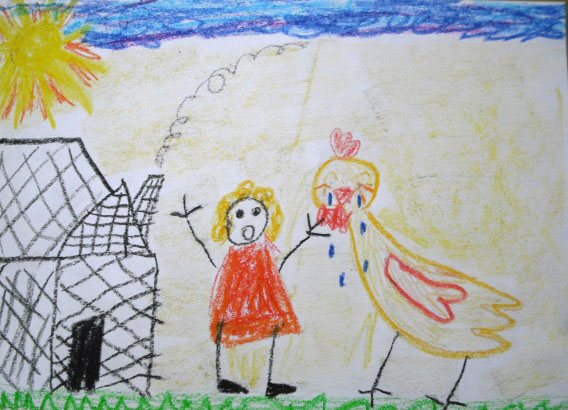 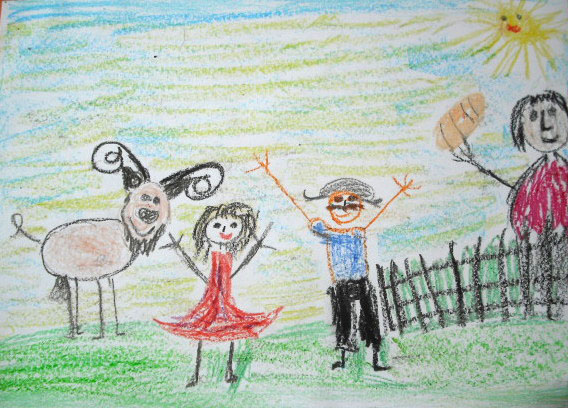 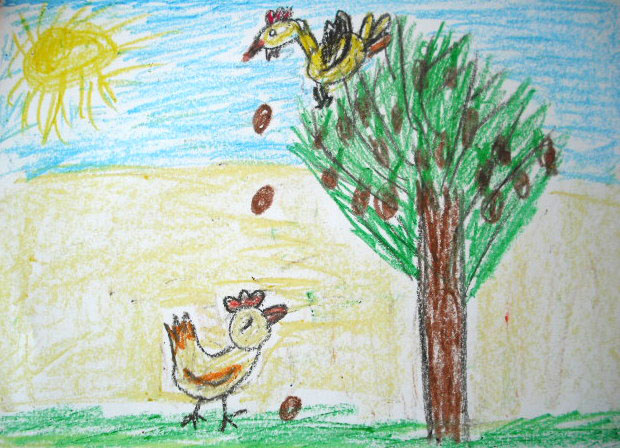 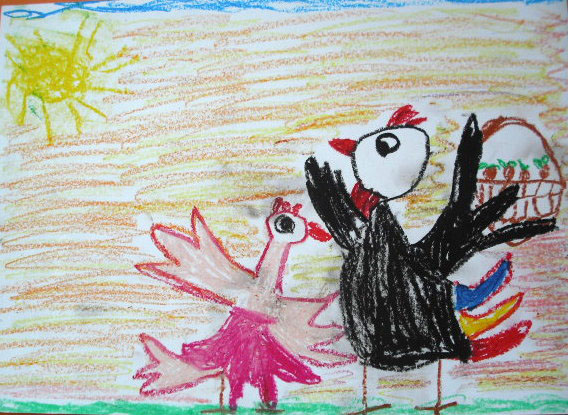 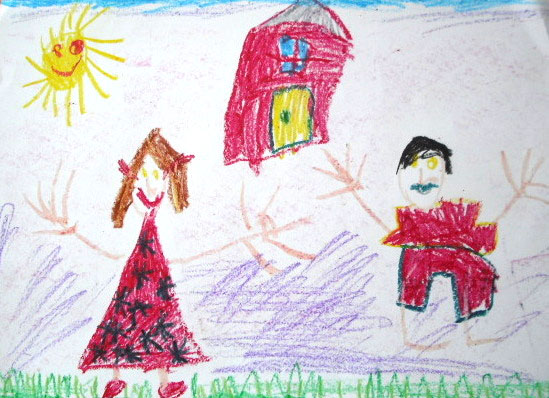 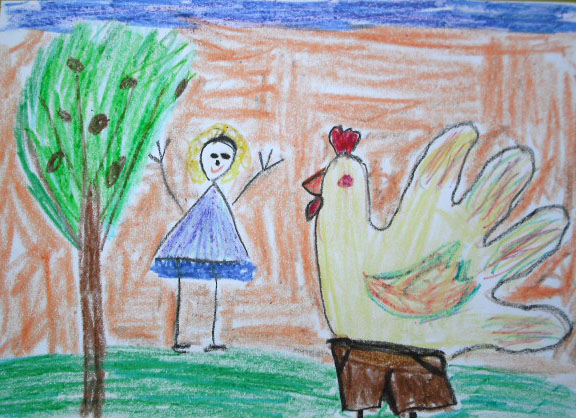 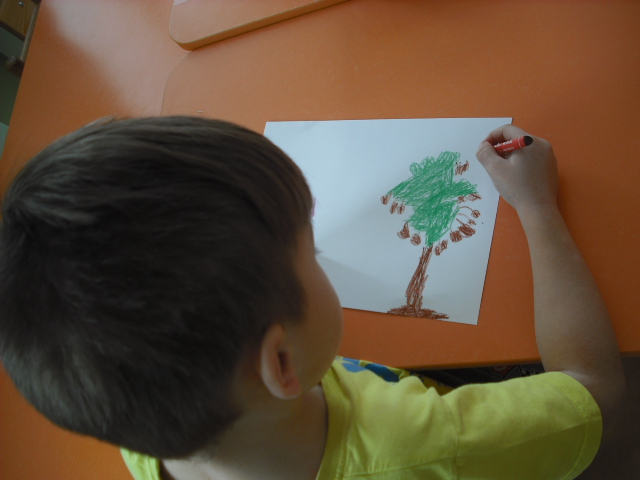 Children made illustrations for the tale 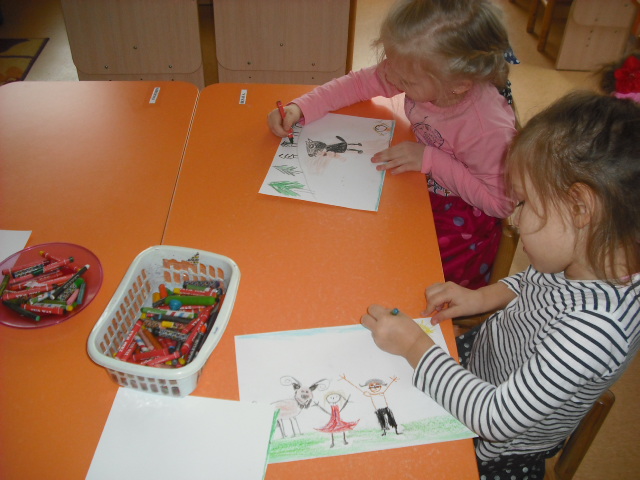 Children are making illustrations for the tale 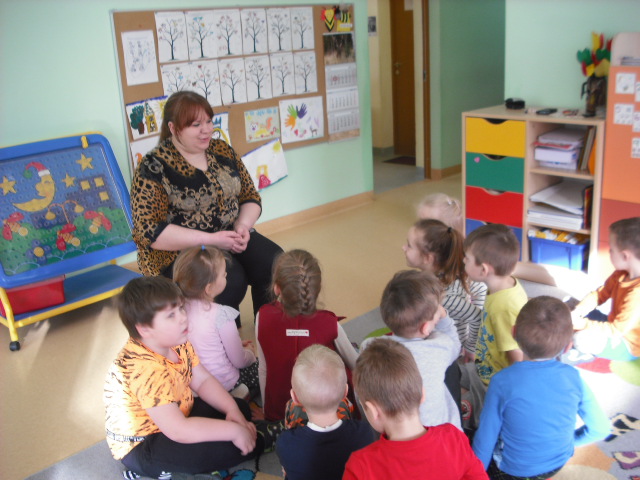 Mom is reading the story