Tale summary
In the country of Semproniano the population was terrorized by the presence of a monster that after having made the animals disappears he made the children disappear. Nobody dared to go of the castle and from their own homes to cultivate the fields in the valley, and soon food was in short supply. A strong and brave youth decided to face the monster using mirror. With this object he succeeded in confusing the monster and he made him vulnerable and killed him. The corpse of the monster was shown in the square of the castle and population of the cried with happiness.
Educational potential / Learning Outcomes
Difficulties must nut discourage obstacles can be faced with courage and cleverness.
Full Plot
In a small village, called Semproniano, once a terrible monster arrived. It lived in a valley, named dei Vignacci, which was situated in the north of this village. As this land was very fertile, the inhabitants had their fields, their vegetable gardens, their vineyards and used to go there to cultivate them.
The monster was so well hidden that nobody had never seen it. Lots of voices circulated among the
population but nobody knew something sure.
But why, we are asking, had this monster arrived exactly there, in that village? We don't know! It's a mistery.
Nobody knew something more and the townsmen, at first, got really curious about it. But one day some farm animals started disappearing: some little sheep which were grazing in the meadows, or some hens or some pets weren't found anymore, but what people found instead, were some traces of blood. Finally when even some children disappeared, then the townsmen began to be frightened and ... And so what happened? It happened that one day, a peasant left the village to go to the fields. Suddenly he stopped terrified, jumped as he saw from afar an enormous, frightening, black figure, he stopped and immediately thought: “This is the
monster, so it really exists!” and running, scared to death, he immediately went back to the village to warn everybody he had seen it. All the inhabitants shut themselves up the houses and nobody went out anymore.
All the cultivated lands had been left and soon there wasn't anything to eat any longer. One day a young man of the village, strong and brave, soffering in seeing what was happening, decided to do something and followed by few men, brave as him, went down the valley to free it from the terrifying creature.
The men were armed with poor objects, sticks and working tools but the young took with him even a mirror made with a slab in a bright metal. When the young realized to be closed to the monster, began to steer la bright slab as to reflect the big monster's image This last was blinded or maybe, believing he was in front of another big monster like him, more frightening than him, felt uncertain and confused and consequently it was less difficolt to attack him and hit to death.
The whole population, from the top of the castle above the valley, had been observing what was happening and went down happily shouting and bringing in triumph the young man.
In the meanwhile the townsmen who had followed the sly brave young man, tied the body of the monster and brought it to the castle square where it was left showed a long.
At the end only a big skeleton remained and it was lifted on the wall of the fortressw, till the weather and the time distroyed it.
Let's ever remember that with ..shrewdness and some courage we can defeat lots of dangers which appareantly seem impassable, as the young man of our story did, employing only a simple mirror.
One Lesson Plan
Brief description of the country of Semproniano, observation of photographic images, observation of images that you/they describe as you/they were done the castles and the life that it behaved you inside, oral rielaborazione and graphics of the history, we build the monster as we imagine him/it, we build the scene that more has struck (the youth faces the monster with the mirror) us, we build the plastic one some history with the defeated monster and the people in party. 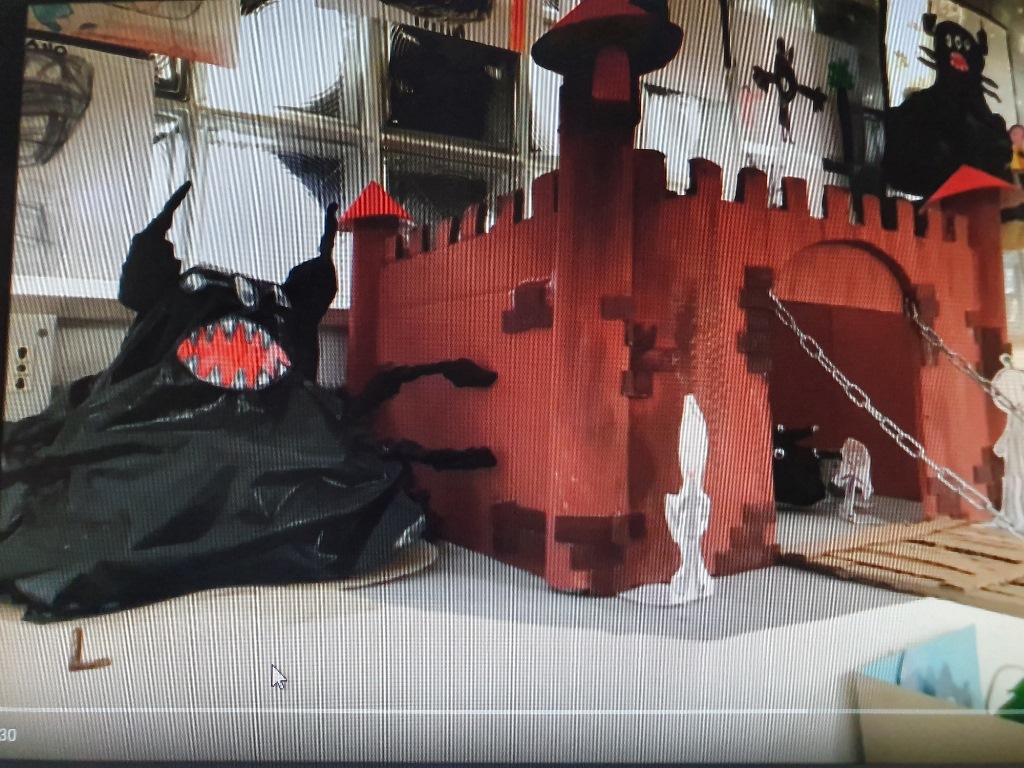